The days in Madrid have been wonderful. We traveled for hours from Toledo on Saturday and found a campsite. Not difficult, as it’s within spitting distance of the motorway sliproad. What we hadn’t realized before we got there is that the closeness to central Madrid came at a price – it was slap bang in the middle of a busy industrial estate.

No glamour location with stunning views of the city of the mountains behind for us. But we persevered and shoe-horned ourselves into a pitch on the tree-heavy site, and set off to look for a supermarket, as supplies were low. No luck, as the motorway hemmed us in, and since we were in an industrial estate, why was there any need for a supermarket. Ooops.

On Saturday, and again on Sunday before we headed into Madrid, we both had a sense that the campsite wasn’t particularly secure, and that it would be a minor miracle if our stay passed off without a hitch. I can’t quite put my finger on anything specific, but overall we had a bad feeling. But we persevered and went into Madrid for the day.

Our aim was to potter around, getting a feel for the city, and waiting for the Madrid Carnaval in the evening. This is the annual pre-Lent festival that happens throughout Spain – like Rio’s Carnaval, in fact. We wandered the Passeo del Prado and admired the museum, snoozed in the Jardin Publique, and took in several of Madrid’s grand plazas. The building above looks grand enough to be a church or a royal palace but is in fact the former headquarters of the post office. This was to be the final point for the Carnaval procession, and when we arrived in the daytime, they were sound-checking the music for the evening’s finale – I have to say that all tourist cities should consider booming opera music around their heritage sites from time to time – it gave it a certain something, that’s for sure!

Anyway, it was finally time to get in place to watch the Carnaval procession, and we found a great spot, not far from the start point.

All was going great, although we were a tad underwhelmed by the excitement levels of the crowds. We’d expected a great party spirit and excessive noise and jollity. In fact, it was all quite restrained – the two participants in the photo above obviously weren’t planning on enjoying any of it!

After about a dozen floats or groups of people had passed, there was a gap. We all waited for some more for a minute or two, but nothing seemed to be happening. With a bit of a ‘Was that it?’ feeling, the Spanish crowd promptly dismantled the barriers, and stepped off the road in the wake of the procession. We followed everyone else, gradually catching up with, then overtaking the procession. We reached the Plaza de Cibeles, where the finale was due and watched the procession arrive. It soon became clear that there was now a lot more floats and groups in the procession – evidently, the second half of the procession had been held back for quite a long time for some reason. So we’d given up our great viewing spot before time! Bah!

Still, there were the fireworks to look forward to, and they didn’t disappoint. The opera music blared out, and the fireworks were fantastic, launched from the Palacio de Comunicaciones building. 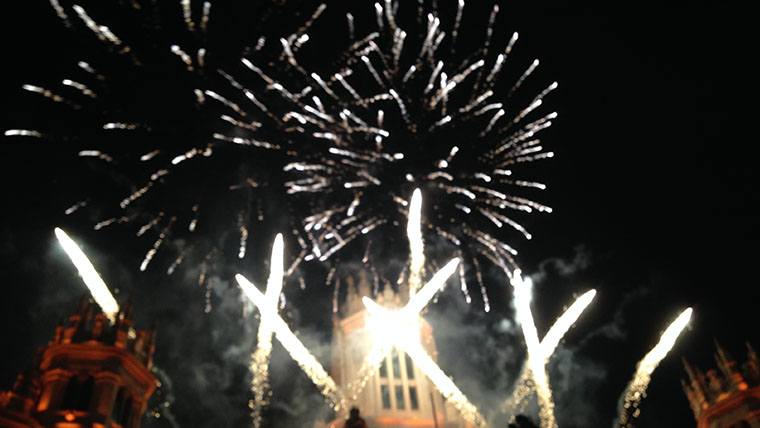 After the fireworks, we headed back to the campsite, by the metro, then bus. The campsite had helpfully not mentioned that the bus stop for the return journey meant a creepy walk along some unlit waste ground at the side of the motorway, followed by a sprint along the motorway slip road! We weren’t impressed. When we got back to the campsite, we were relieved to find that nothing had happened to the van whilst we were gone, but not so thrilled to find that we had unsavory neighbors, who made us feel uneasy.

We’ve stayed in dozens of places, on campsites, aires, and wild camping spots, and this is the first time we’ve really felt squeamish about a place. So today, we moved campsites, to El Escorial. It claims it’s easy to go into Madrid by bus from here, but we think it’s way too far for that, realistically. So, we’ve decided that we’ll move on tomorrow, and we’ll revisit Madrid on another trip. Not quite the city extravaganza we’d planned, but that’s life. El Escorial is at the foot of the Sierra de Guadarrama mountains, 900m above sea level. It’s cold, very cold! The snowy peaks looked lovely as we drove along the motorway, but tonight we’re just hoping it doesn’t snow here, and that our pipes don’t freeze. We’re all drained down and have our fingers crossed!