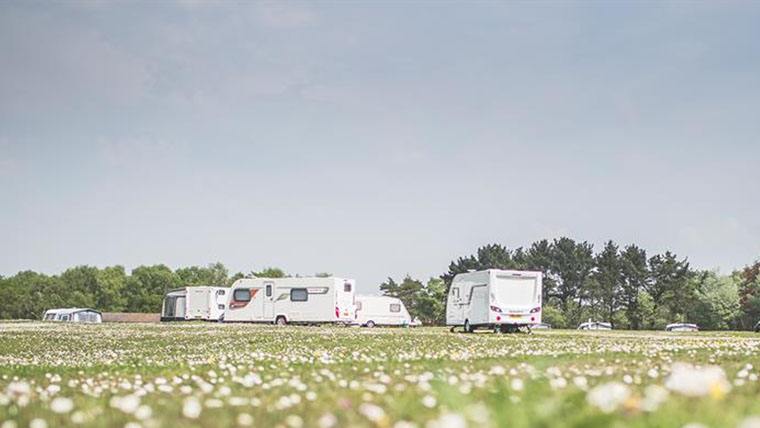 We camped at Holmsley, in the New Forest, the night before the site closed for the season at the end of October. Thankfully, that made the site much less busy than it would be at any other time. I’m guessing that ‘busy’ at Holmsley is really very busy indeed, as the site has a whopping 600 pitches. To be fair, the pitches aren’t marked out, so a full Holmsley might not feel so crowded as a full site where the pitches are rigorously specified.

It’s a quirky kind of layout at Holmsley, owing to the fact that it’s an old WWII airfield. There’s a fair amount of concrete, with grassy areas off to the sides. We pitched on grass, fairly close to the front of the campsite. It had rained hard all week so the ground was fairly boggy, with patches of standing water. But we had no trouble getting the van on or off the grass, so we weren’t that bothered by this.

The big plus for the site is that you really are right in the heart of the New Forest – yes, the ponies are right outside the campsite! Some pitches are located right by the fence, so you can watch the ponies from the comfort of your van (and they can watch you too). You can simply find your pitch, get set up, and be out walking in minutes. Over the weekend, we spotted dozens of ponies (of course), as well as free-ranging cows and, the highlight of the weekend, a deer sprinting through the woods. We heard woodpeckers too but sadly couldn’t spot them. We’d hoped to see the pigs in pannage, released onto the Forest land each Autumn to eat all the acorns, so that the ponies, for whom acorns are poisonous, stay safe and well. But we saw no pigs – I think they roam mainly in another corner of the New Forest.

The site has good, clean, and fairly modern facilities, although some of the shower blocks were already closed for the end of the season. The site shop looked like it would normally be really handy, but the day before season end it was only of use if you were all out of fudge or frozen chorizo. Yes, frozen chorizo. Who the hell uses frozen chorizo, anyway? There was a sign at reception saying that they run deer-spotting trips every hour or so, but again this seemed to have finished for the season.

All in all, I’ve got mixed views on Holmsley. I like the location, but I think that the sheer number of pitches combined with free-for-all pitching would make it quite arduous at peak times. But I guess that’s the price you pay for being in the heart of one of the most beautiful places in the South of England.