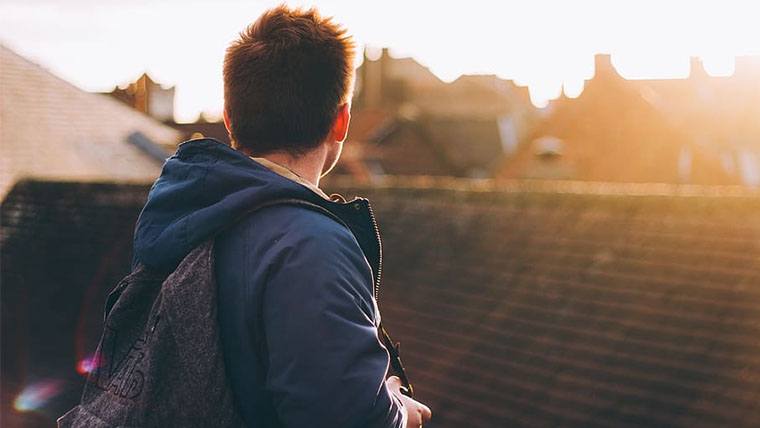 Him: Your new album is very different from Hive Mind; it feels much more playful and daring, like a much-needed release of energy. Considering the short space of time between Hive Mind and Dream On, what would you say motivated you to release two LPs in such quick succession?

Daniel: I had begun work on Hive Mind late in the spring of 2011 and wrapped it by the end of August. In July, I started playing shows, and even though it was fun straight away, it was also a little awkward. I’ve played a lot of shows in my life, but when you start a new project, it always takes a while for the live thing to work out, technically, vibe-wise, whatever. You’re taking all these ideas that have thus far existed only in a super private zone and seeing how they actually affect people in real-time. So anyway, the record overlapped a little with the live thing, but not that much and the Audacity workflow was really dominating the scene for me at the point. I was curious to see how far I could push myself and the program technically, to see how alien I could get things to sound, all that. Once I finished it, I was proud of the product, but immediately struck by the feeling that I wanted to do something more, something rawer and more condensed. So after doing a shitload of touring, I took three months off and hustled it.

Him: I’m intrigued by the Beyonce sample in the track and video respectively, what made you choose her/that track? Is there something self-consciously tongue-in-cheek about sampling major-label pop records in this way?

Daniel: I actually chose the sample because I was hearing the ‘baby boy’ vocal part in my head and figured that there had to be some Acappella out there with prominent ‘baby’ and ‘boy’ clips. I had totally forgotten about the Beyonce track, and just did a search for ‘Baby Boy Acappella.’ But yea, I mean… she’s the best! Part of sampling pop stars is that they come loaded with meaning, that there’s something communal to comment on or to participate in, but sometimes it’s just that they’re the most capable singers.

Him: What was your thought process behind tying together the track and video, did you and Aurora discuss your ideas together?

Him: How do you feel the video translates the track?

Daniel: I would say the video is essentially an exact visual representation of the track, a lot of strobing images that get melted into each other, a lot of feedback, and a final submerging, fucked upending. There’s no story to the song or the video, they’re both (to me) kinda alienating drool jams, like being so in your body it makes you ill or disgusted but also kinda turned on or something. There’s a lot of body horror/cultural revulsion in my music and I think the video does a nice job of feeling out these zones of simultaneous horny, physical engagement, and abject horror.

He asked me: Your aesthetic seems to be centrally focused on the merging of visual technologies – analog and digital, synaesthetic use of colors and time delays, almost ‘retro-futuristic’ if you will – how do you feel your video direction has developed over time with this in mind?

Me: My videos are dream sequences mostly.. either a sexualized fantasy like ‘big coast’, a half dreamlike ‘shadow disco’, or in this case a psychedelic trip, the images u see burned in ur mind after a weekend of music & perhaps a somewhat dark encounter w a lover.
I reach for whatever mediums help me create that subjective trip feeling. I love my analog setup (video mixers & other hardware) because it’s so chaotic & fluid, creating unexpected almost subconscious flows of video that I can later edit & recombine w more care. The digital/analog path is going back & forth many times. There’s HD, VHS, samples from YouTube & tons of reprocessing going in all directions.

Him: What drew you to direct this video for Ital, and this track in particular?

Me: We had an elaborate idea to shoot a melting, apocalyptic video at a condo for the single “Doesn’t Matter ( If U Love Him)” earlier in the year but it didn’t work out. “Boi” is kind of a similar track actually… obsessive & twisting, but also unexpectedly dancey. I love the track and the way it develops is perfect for making an abstract video.

Him: Who or what would you say are your inspirations when designing music videos, what tends to grab you visually and sonically about each project?

Me: Usually for each video, I try to get really into the ideas of the artist first & then re-interpret that thru my vibe. For this one, I latched onto Daniels’s description that the track was about sexual obsession. Since it samples Beyonce, the first thing I did was look up the video for that song and was happy to discover it was completely amazing. So I chopped up these two short close-ups of her & randomly cut & paste them to the rhythm of her voice, and that momentum gave it the hypnotic off-repetition that propels the video & song. She is so sexy and seeing her over & over is something I could zone out to for a while. But as it gets processed over time it gets darker, the feedback at some point looks like flames and by the end, it looks like she’s tied to the bed writhing, and there are flashes where the shadows of her face, inverted & submerged in feedback, looks like a skull. (which happened by surprise).
I wanted to film Daniel performing the track live because he has a very captivating live show, and also wanted
to show him melting, which is a feeling he has told me he experiences, and definitely is what it feels like for me to hear the song.

Him: How do you feel the video translates the track?

Me: The video is meant to submerge you in the track, leads you through its world & the various moods/ possible experiences within it.