Reading about Tangier, and about Morocco in general before our trip today, I’d learned that it can be a love it or hate it a thing for many visitors. I can’t bring myself to say that I hated it, but I need a lot more convincing before I could say that I love Morocco.

We nipped over on a day trip from Tarifa, the closest point to Africa in Europe. The chaos I’d read about started at Tarifa Ferry Terminal, which is essentially a building site. Passport control on the ferry itself was fairly laughable, but the crossing was smoother (but much longer) than I’d anticipated and soon enough we were tipped out at the port in Tangier.

Our internet research had suggested that we avoid the ‘guides’ outside the ferry terminal and make our way ourselves to the Medina, which is directly opposite the terminal. This was a good strategy and the first hour or so was great as we pottered about the souk, watching as the market came to life. 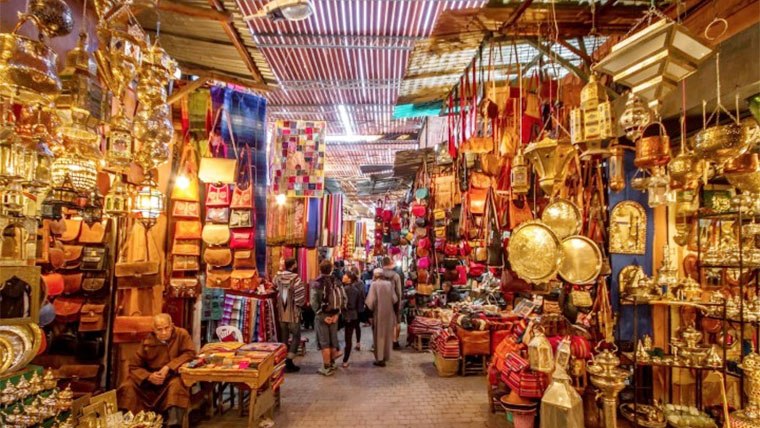 As the day progressed, we were hassled more and more by people who wanted to ‘guide’ us around the Medina, show us to a restaurant, and so on. None of this was particularly troublesome, as we were firm and fair and said no politely but quickly. It was only when we headed for the Kasbah, that it turned slightly uncomfortable. As we made our way there, through the warren of tiny streets in the Medina, using a street map we’d bought from a kiosk, a young guy appeared at our elbow saying that the tiny street we were aiming for was ‘closed’ and that we should take the street next to it. He pretty much obliged us to go down the street he was indicating, through persistence and just standing in our way. We went a little way down this street, but then it turned very untouristy, with no shops and no other people, and all of a sudden, there were 6 guys following us down what was really a dingy lane 3 feet wide. We turned around and walked firmly away. I can’t really say what their plan had been, probably just to intimidate us into giving them money for ‘guiding’ us through the Medina. But it was pretty unsettling. We tried again to make our way up to the Kasbah, but again a guy turned up to help us, again with the ‘don’t go down that street, go down this one’ routine. So we gave up on the Kasbah and went back down to the areas where there were more people around.

I’d read that if the chaos of Tangier is too much, tourists should head for the Cafe de Paris, so we trekked this down. I’m not quite sure how it earned it’s reputation as an oasis of calm in the hubbub of Tangier, as when we arrived it was populated exclusively by men, who stared at us pointedly. We didn’t go in.

Lunch was perhaps one of the more interesting parts of the day – the food wasn’t particularly great as we ate in a tourist cafe, but it gave us chance to sit down and watch Tangier rushing past. Driving in Morocco seems to operate on the ‘Who Dares Wins’ model, with there being no road markings, no system of priority at roundabouts, and no street too narrow to squeeze a taxi carrying 7 passengers into. 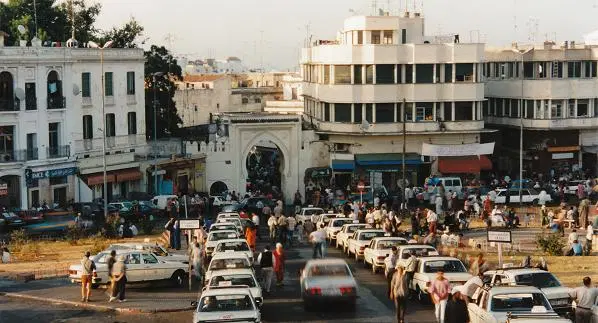 After lunch, we started to make our way back down through the market, to head back to the port. Suddenly there were a hundred men coming up the street, singing. I thought it was a protest at first, but then we saw they were carrying a body, draped in a white sheet, on a wooden stretcher, so we realized it was a funeral. Interesting, if a little is closer to a dead person than I usually like to be.

We’d changed some Euros into Dirham at the start of the day, and as we hadn’t spent it all, I tried to get it changed back to Euros. Haha, perhaps I’m naive but I had assumed that this would be possible! The foreign exchange desks just refused point-blank. So we were left with bringing dirhams back with us or finding something to spend our cash on….so I’m now the proud owner of a lovely leather satchel bag that I didn’t really need, but it’s quite nice anyway!  Top tip – only get enough dirhams for your needs and get more if you run out – you won’t be exchanging dirhams back if you have spare money at the end of your trip! Pretty much everyone will quote you a euro price anyway, so I think you could get away with not having any dirhams at all.

Finally, we were back at the port in good time for our ferry back to Spain.  The terminal building was deserted so we wandered through the security check area and the passport control to join the queue for boarding the ferry. After 20 minutes of queuing, the guy checking passports indicates that we were supposed to have had our passports stamped on exit, and sends us back to passport control, which is now manned.  That put us at the back of the now enormous queue for boarding the ferry. Slightly frazzled, we finally got on the ferry in time, sat back, and pondered our day in Tangier.

Would we recommend a day trip to Tangier? Probably not – it was interesting to see the bustle and chaos of Morocco, but intimidating for women traveling alone. Also, Tangier is doing well from its proximity to Spain, but it doesn’t actually have that much to see or do in the city center. With hindsight, I think we’d have got a better sense of Morocco by taking a short-break by air to Marrakesh from Barcelona or another Spanish city. For us, Tangier was good in parts, but decidedly iffy in others.